Everyone says that it’s important to present your story to the reader, as in the story of your life. They say that readers want a personal connection.

This is the definition of the word pseudonym from the Merriam Webster dictionary:

Mark Twain is the pseudonym of the American writer Samuel L. Clemens.

The most notorious serial killer of the 19th century remains known only by the pseudonym of Jack the Ripper.

I love the examples, especially the second one. One might say that I’m a serial murderer of literary sense and good taste. I guess that’s the reason why I’m not publishing under my own name.

But really, there are a million and a half reasons why someone might not want to use their birth name.

Here are some; you decide which one is mine:

I can go on an on but I think you get the picture.

After having said all of this, I still don’t want to alienate this elusive reader clamoring for that personal connection – the warm and fuzzy feeling one gets from learning that their favorite author had chicken pox too.

I will be posting several short vignettes with my false biographies. They will have at least a hint of truth. I promise to write more than one and let the people vote on which one I should use as the “official one.”

How’s that for a personal connection?

After watching Pat’s attempts at introduction, the immigration official shrugged his shoulders and made up the name. Pat was of added convenience because it could be either male or female. For those of you who don’t know – Argadnellians are neither or both, depending on the point of view. They are monomorphic and reproduce asexually by budding.

At first, many things Americans take for granted were difficult for Pat. They were things like speaking English, breathing air, using credit cards, seeing and smelling, telling the difference between a nickel and a quarter.

It’s been almost two years since Pat took The Oath of Allegiance, and he is proud to be an American. She has friends, he is happy, and she generally ignores the occasional stares from the fellow subway riders, as he commutes daily to her job at Brooklyn-Battery Tunnel Ventilator Building in downtown Manhattan.

Pat Anvil, was born Patricia Eleanor Eberstark in the midst of Iowan cornfields. I mean it quite literally, her mother went into labor right by the good old John Deere corn harvester. Pat was delivered by her father, Robert Eberstark Jr. Her mother was fond of telling people that Bobby cut the cord with a pocket knife after bathing it in some whiskey he always carried in a flask in his pocket.

Pat remembers her childhood as happy and busy and not much else. Writing is the only thing she remembers well. She trusted paper her innermost secrets, often burning the pages she endlessly struggled to get perfect first.

She married her high-school sweetheart and by the age of twenty nine she had two kids and a bun in the oven.

It all changed when her husband, Simon Anvil, was shot dead in a road-side robbery by two out-of-town drifters.

Sick with grief and despair Pat had discovered that Simon didn’t manage family’s finances well. He let his life insurance lapse, the land and the equipment were put up as collateral for loans that were piled up to the famous blue Iowan skies.

Penniless, with two and a half kids in tow, Pat was close to following her husband to the lands beyond until she found an unexpected source of solace.

The Buddha came to her in a dream and said, “We will all get old, sick, and die. There is no point in worrying about something you cannot change. You are not done with this life yet. There is work to do.”

She gave birth to her third child. She named him Buddha Andrew Anvil or “Baaaaa…” his siblings immediately nicknamed him. Shortly after, she packed up and moved to India.

She spent the next seven years on a journey that took her to many cities and villages across the subcontinent and other parts of Asia. She was learning and teaching as she went.

Those who know her claim that she had achieved enlightenment. She, herself, tells those people that saying or thinking this is an un-enlightened thing to do.

Pat and her three kids now live in a small loft in the TriBeCa neighborhood of New York City where she teaches Yoga. She co-sleeps with her children, even with now sixteen-year old Sarah. She often jokes with her friends, “When Sarah gets married, we’ll just have to buy a bigger bed.” Most of her childless friends smile politely and roll their eyes behind her back. In her mind, Pat smiles back at them – the joke is on them when they die alone in a retirement home. She tries to banish those thoughts as unworthy, but we all have our struggles. Even Prince Gautama had his fair share.

Pat doesn’t eat or wear animal products. She loves barefoot walks on the Coney Island beach in the summer and shopping at the Union Square Farmers Market in the fall.

Her favorite word is Peace.

Patrick (Pat) Anvil was born in Brookhaven, NY to a middle class family. His father owned a shoe repair shop where he and his wife, Pat’s mother, worked.

From an early age Patrick exhibited the traits of a bright but somewhat distracted and disorganized child.

He got a computer as a gift for his eleventh birthday and became obsessed with it. He started programming, in Basic first, then progressed to the different programming languages. At the age of sixteen he dropped out of high school and moved to California. After several unsuccessful ventures he finally struck it big as one of the founding fathers of Cucumber Computers, Inc.

Several years later he was driven from the board by the directors who didn’t like his abrasive demeanor.

Pat decided to take his time looking for another venture. He later categorized this period of his life as a starting point for his long history of substance abuse. With relatively little to do, he became a frequent cocaine and alcohol abuser.

Eventually he pitched his tent with another Valley startup and boozing and partying stopped for the lack of time.

A year later, after six months of steamy romance, he married his coworker, Wendy Chang.

The defining moment in Pat’s life came one summer night when he was driving home from a corporate party. His car struck and killed a pedestrian, a Mexican migrant worker. Pat called the police himself and remained at the scene. His alcohol level was 0.18 and the footage from the two intersection cameras confirmed that he had been driving at speeds well over 80 mph.

The trial was fast due to the mountain of evidence and the fact that Pat didn’t have a will to fight the charges. In prison he was put on a suicide watch and prescribed anti-depressants. The company disowned and distanced itself from Pat. His young wife had divorced him. A nest egg he had since his days at CCI had quickly gone to the lawyers and to the IRS that took this opportunity to audit him.

He remained clinically depressed through his incarceration and became addicted to crack cocaine.

Pat was released from the California’s prison system after serving four years of his twenty-year sentence.

After holding a string of menial jobs, Pat had finally firmly landed on the street without any means to support himself and his hungry habit.

Several years and three thousand miles later, Pat washed out on the streets of New York, panhandling and sleeping under the bridges and in subway entrances.

Pat’s awakening didn’t come all at once but in stages and writing was instrumental in his recovery. Most of his debut novel was written long hand in pencil on the rolls of toilet paper Pat stole from the public restrooms. At first Pat followed his protagonist’s adventures with detached interest and only much later it changed to a full involvement.

Another turning point came when Pat had re-discovered his passion for technology and cobbled together a working laptop out of several discarded ones.

Pat is still homeless, but he spends more and more time in the shelter and less on the streets and he has been clean for the last six months.

I can honestly say that at least one thing about this picture is true – I do own this exact coat. Doesn’t it look like medieval robes in this picture? 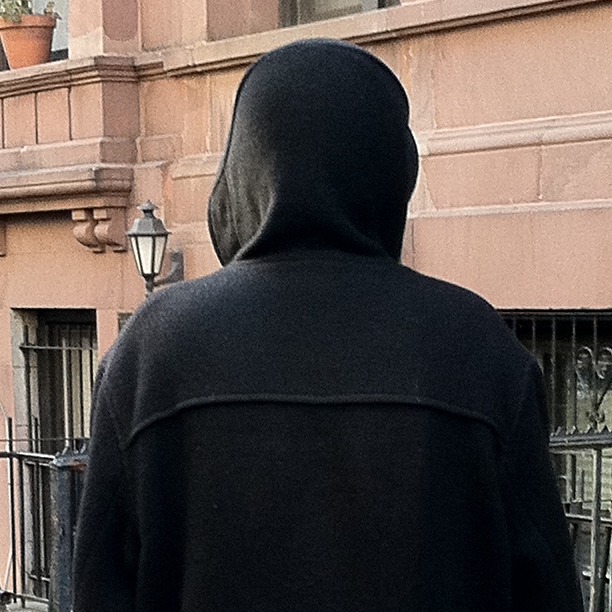